Very few garden plants are as useful, both in the medicine cabinet and in the kitchen, as mustard.  Wait, what?  The yellow condiment that covers millions of hot dogs each year? Well, yes.  That’s the beauty of this plant….every part of it is used for something!  The seeds are ground up and added to liquid and seasoning to create the condiment.  But the greens and oil also have their uses.

Let’s be clear.  Mustard was around way before Mr. Heinz put it in a yellow bottle, or it was marketed as “One of Life’s Finer Pleasures”.  Mustard is one of the oldest plants used by humans for both food and medicine.  Additionally, it has deep spiritual significance to Buddhists, Muslims, Jews, and Christians alike: According to an allegorical story by Gautama Buddha (c. 563-480BC), the Buddha asked a grieving mother who lost her only son to bring a handful of mustard seeds from a family that has never lost a child, husband, parent, or friend.  When the mother was unable to find such a family, she realized that death is common to all and so she should not be absorbed in her grief.

In the Qur’an, God states that the scales of justice on the Day of Judgement will even measure deeds as seemingly insignificant as the weight of one mustard seed because God is the most efficient reckoner.  At the Seder on the first two nights of the Jewish Passover, the Haggadah relates that a man having sown “a single seed of mustard…would climb it as he would a fig tree”.  Christianity teaches that it takes faith the size of a mustard seed to connect with God and perform good works through Him and for Him.

Brassica seeds have been discovered in tombs of Pharaohs.  They were thought to bring good luck.  With the expansion of the Roman Empire, seeds traveled to Gaul, Spain, and England.  King Charlemagne introduced them in the gardens surrounding the monasteries of Paris, establishing the now famous industry in France.  A 1634 law granted exclusive mustard-production rights to Dijon, now famous for its mustard.  In German folklore, brides sewed mustard seeds into their dresses to bring them domestic success; the seeds were thought to guarantee that the bride would be the authority in her household. In northern Europe, mustard seed was said to keep evil spirits away.

Historically, Brassica seed has had numerous medicinal uses.  In Greece in the sixth century BCE, Pythagoras used mustard as a cure for scorpion stings.  A century later, Hippocrates used it to make many medicines and poultices. Egyptians used mustard to treat gastrointestinal disorders, as well as to combat food-borne bacteria and pathogens. French monks used mustard to treat wounds. All over the world, mustard plaster has helped increase blood flow to inflamed areas which accelerated healing.  Brassica was thought to be an aphrodisiac in Europe and China. 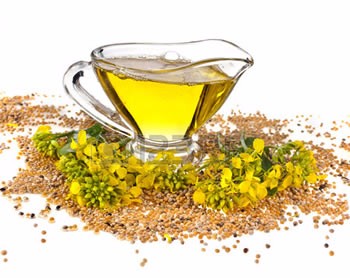 he resulting volatile oil by distillation. The pressed oil is often used for cooking in North India, Eastern India, Nepal, Bangladesh and Pakistan. Mustard oil is banned for edible consumption in the EU, USA and Canada, principally due to its 47% erucic acid content. The USFDA requires all mustard oil to be labelled “For External Use Only”. Erucic acid is known to cause accumulation of triglycerides in the heart, development of fibrotic lesions of the heart, increase in risk of lung cancer, and anemia.

In the kitchen, whole mustard seeds are used in sauerkraut, cabbage, pickles, relishes, curries, sauces, pot roasts, and to flavor meats such as lamb, pork, and rabbit.  Mustard seeds can be sprouted and used in salads, sandwiches, or as a garnish.

Fresh mustard flowers can be used as an edible garnish or can be cooked for 2-3 minutes in boiling salted water, drained, and served with butter and sea salt to taste.

Loaded with disease-fighting nutrition, mustard greens are full of great peppery, rich flavor, yet so light in calories, you can eat as much as you want. The mustard greens nutrition profile is packed with fiber, vitamins, minerals, protective phytonutrients, and notably, more Vitamin A and K than the standard multi-vitamin supplement. Yet, because of their slimming calorie count, their nutrition-to-calorie ratio makes them one of the most nutrient-dense and beneficial foods on the planet. Young mustard greens are great additions to salads and stir fry dishes.

It would seem that planting a garden full of mustard greens might be a brilliant idea.  The plant is useful from plant to seed for total body well-being.